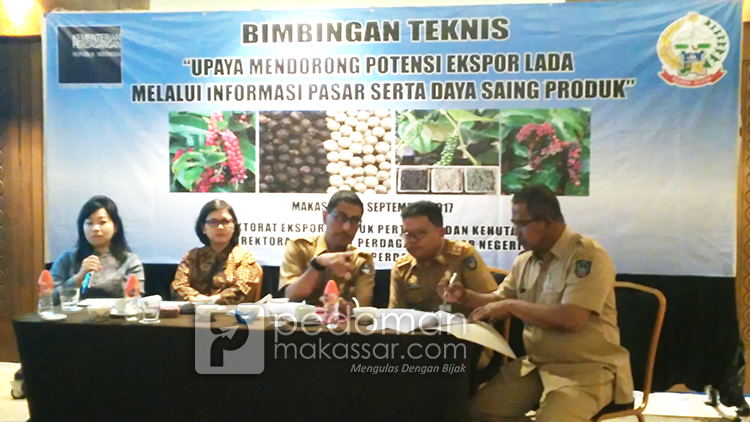 Ms. Selvi was invited to Makassar on 19th of September to attend a gathering to promote pepper grown in South Sulawesi.

The full article can be found by clicking on the following link.

Below you can find a translation of this article in English.

Tuesday, 19/9/2017 MAKASSAR, PEDOMANMAKASSAR.com - The Ministry of Trade of the Republic of Indonesia together with the Department of Industry and Trade of South Sulawesi and related Associations to conduct Technical Guidance (Bimtek) on a number of pepper farmers in South Sulawesi as an effort to boost export potential and pepper competitiveness in the international arena.

This is done because of the high export competition and the many potentials and opportunities for the existing crops in South Sulawesi, especially pepper, to various international markets.

Moreover, the increase of pepper exports during the period 2012-2016 experienced a positive trend of 5.01 percent. In fact, in 2016, pepper exports contributed 0.3 percent of total non-oil exports in Indonesia, where black pepper exports are dominated by black pepper of USD 220.6 million and white pepper with a contribution of USD 187.1 million.

The Director of Export of Agriculture and Forestry Products at the Directorate General of Foreign Trade, Tuti Prahastuti, said that with the potential of this industry, Perindag Sulsel will do more to optimize the role of pepper farmers in South Sulawesi to contribute more to the export of international markets. Moreover, the export destination of pepper is increasingly showing positive trend. As, Vietnam's export destination countries recorded during the period 2012-2016 contributed 12.26 percent.

Besides Vietnam, as well as some other contributing countries, such as USA, India, Singapore, Netherlands, Germany, Japan, Malaysia, China, France and others

"This is certainly exciting and become its own motivation to further improve the export potential and pepper competitiveness to the international arena. Moreover, the price of pepper in Indonesia, both black and white pepper has experienced an increasing trend in the last 10 years, namely 18.04 percent and 17.89 percent, "he said when met after Bimtek Efforts to Push Potential and Export of Pepper Through Market Information, Competitive Product, at Four Points Hotel Makassar, Jalan Landak Baru, Tuesday, 19/9/2017.

Managing Director of PT Aman Jaya Perdana, Selvieana Aprilia, stated that as an exporter, her company deeply appreciates what efforts the Ministry of Trade of Indonesia and the South Sulawesi Industry and Trade Office in Bimtek are making and enjoys meeting the pepper farmers, especially from Luwu.

Only, in this case warehouse receipts need to be prepared for farmers, so that farmers are not trapped with middlemen.

"This warehouse receipt will also work if at any time the price of pepper drops, so it will not harm and distress the farmers," he said.

Meanwhile, Head of Industry and Trade Office of South Sulawesi, Hadi Basalamah, said that through the Bimtek, it together with related institutions openly expressed what is the problem, such as lower productivity, the number of farmers who switch to other commodities, unprepared equipment drying, screening, and warehousing to produce pepper with superior quality as standard buyers abroad, and the lack of promotion and buyer information.

"Not to mention the others, such as the emergence of new competition as a spice manufacturer, such as Vietnam which is currently the no. 1 in the world. This is certainly a challenge for us how the future of pepper commodity in Indonesia, especially pepper in South Sulawesi, become more competitive international and also superior quality overseas. Therefore, the role of various related agencies in this case is very necessary, because if the farmers do not want, then we can also not exist, "he said.